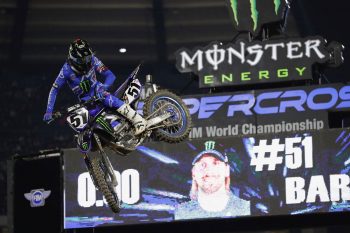 For the second year running, Monster Energy Yamaha Factory Racing Team’s Justin Barcia kicked off the Monster Energy AMA Supercross Championship with a win at Anaheim I. His teammate Aaron Plessinger battled back from a tough night to finish 12th, Saturday night at the Angels Stadium of Anaheim.

Barcia came out swinging with a Heat win to show his intent. He carried that over into the Main Event with another stellar start and moved into the lead early. The Florida resident held onto that lead until a few laps before the halfway mark. He made an error in the challenging track conditions, but was able to minimize the damage and get back on track quickly in second. Barcia kept pushing and was able to move back to the front after an error from the race leader. He put his head down and knocked down the laps to return to the top step of the podium, his fourth victory in the premier class.

Unfortunately for his teammate Plessinger, his sophomore season in the 450 class did not begin as planned. A first turn crash in his Heat race put the 23yr old in the LCQ and had him fighting to take the last transfer into the Main. He then got a really good start from the last gate pick to salvage the night with a 12th place finish.

The Monster Energy Yamaha Factory Racing team heads east to St. Louis, Missouri, next Saturday, January 11, for Round 2 at the Dome at America’s Center.

Jim Perry – Monster Energy Yamaha Factory Racing Team Manager: “What a great way to start the year. The team’s been putting in a lot of hard work and it paid off. The YZ450F is a great platform. With some minor tweaks, some hard work and some healthy guys, we got a solid result. We’ll take this on to St. Louis next weekend and work to be consistently on the podium and fight for this championship all the way to the end. It was great to see Justin get the Heat win and the Main Event win tonight. It almost looks a little bit like last year, except the conditions were much better today from last year’s rain race. Aaron was pretty good in practice but a first turn crash in his heat race took the wind out of his sails. He soldiered on and struggled a bit in Main Event, but at least was able to get a decent finish. We’ll have him checked out on Monday and move on to St. Louis.”

Justin Barcia – Monster Energy Yamaha Factory Racing: “It doesn’t get much better, honestly. We had a really nice day. I qualified alright. The Heat race was great, I got a great start and won. And the main event, wow, just unbelievable. I got another great start, led a lot of laps, but I made a mistake and got passed. I regrouped and got into the lead again and took the win. I’m feeling over the top right now. It’s phenomenal! It’s going to be a long season though. I just want to keep having a lot of fun and keep putting that bike on the podium.”

Aaron Plessinger – Monster Energy Yamaha Factory Racing: “A1 wasn’t really the night that I wanted. I felt kind of tight in practice and qualifying and then in the Heat race I went down and someone ran over my ankle. I had to get it taped up and went out for the LCQ. I was able to get the last transfer spot to the Main and I pretty much got the best start I could have with the gate pick that I had. In the end, I was able to salvage the night with 12th and get some valuable points for the championship. I’m going to go back with the team this week, work out some kinks and come back swinging in St. Louis.”