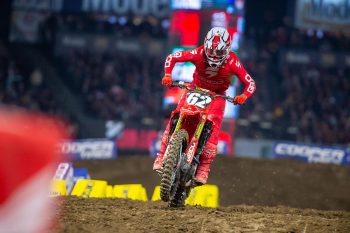 The 2020 racing season kicked off with the traditional sold-out opening round of Monster Energy Supercross at Angel Stadium, and the GEICO Honda team sent one veteran and one rookie into battle. Christian Craig emerged with a podium finish after another rider was penalized. Rookie Jett Lawrence was dealing with food posioning but still somehow carded a top-ten in his professional U.S. supercross debut.

Craig’s podium was a big one because he was unsure if he would be able to race as he appealed a suspension from the championship sanctioning body. He got the green light to race a few weeks before the event.

“Anaheim was awesome honestly,” said Craig. “I went into the weekend just grateful to be there so to leave with a third is so cool. For months I’ve been riding supercross but had no idea when I’d be racing. I assumed it would be in April, when my suspension was supposed to end originally. The trip I took to Switzerland in December thankfully went my way and I was able to race A1. All day on Saturday I felt good. I qualified third overall and got second in my heat. The main was going pretty good for my first race back. I started around third and stayed there for a lot of the race. Dylan [Ferrandis] got by me eventually and then I road pretty tight, keeping me in fourth. [Austin] Forkner, who was in front of me, ended up having a crash and re-entered the track at the wrong place. I was not far behind him, so I really do think we were in for a good battle had he entered back where he was supposed to, but we have the rest of the season to do that. Saturday night I got the call that I would be bumped up to third for his mistake. I’m not extremely pumped on it because I want to finish in third and actually stand on the podium but we will get there! Really looking forward to the rest of the year!”

Lawrence had enough to deal with in taking on his first race, but the drama compounded when he got sick before the race.

“Well, Friday started off with getting food poisoning from a Chick-fil-A sandwich!” said Lawrence. “I ended up waking up at one in the morning throwing up and having diarrhea and really bad stomach cramps so I couldn’t make it to press day. Saturday morning I was feeling a little bit better but I didn’t get very good sleep. I was pretty tired plus couldn’t eat anything—just a rice cracker and some sips of water so my energy was pretty low. In practice I was struggling to dial the track in and get a good flow and was struggling with the whoops a bit because they were very close together and fast. It was easy to miss a whoop with the front wheel and go over the bars, and then of course that’s exactly what I did! By the time it came to the main event I was starting to feel a little bit better but halfway through I started to get some belly cramps and started to feel a little bit lightheaded. At the end of the day it was not the result I was wanting but I guess it is not such a bad result for my first race.”

Craig and Lawrence will race again this weekend in St. Louis.