Webb battles through sickness to finish on the podium at Anaheim 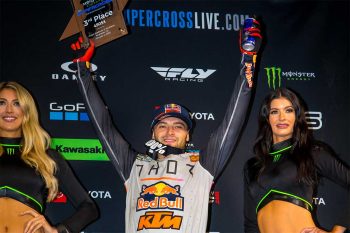 It was a great start to the 2020 AMA Supercross season for Cooper Webb and the Red Bull KTM Factory Racing Team as the reigning 450SX Champion secured a podium finish at Saturday’s opener in Anaheim, California despite battling through a bout of sickness all weekend.

Webb struggled throughout the morning’s practice and qualifying sessions but he was able to dig deep and make it count as soon as the racing commenced. In 450SX Heat 2, Webb got off to a fourth-place start aboard the KTM 450 SX-F FACTORY EDITION and he battled inside the top five early on. Coming into the final lap, Webb had his sights set on a top-three finish and he brought it to fruition with a last-lap pass to overtake third.

In the Main Event, Webb started off in sixth and he immediately began charging his way up to the front, reaching the fourth-place position by lap four. While holding off a hard-charging pack of riders behind him, Webb was able to propel himself into the podium battle and just after the halfway point, he made his move into third. Holding strong in the final laps, Webb secured the final podium position with a phenomenal ride despite feeling under the weather.

Cooper Webb: “It’s been a struggle today with the sickness but that’s what makes this sport so gnarly, you have to be able to go out on Saturday and perform despite how you’re feeling. I’m just pumped to be on the podium, I feel like I dug deep and pushed through it tonight and it’s a good start to the season for myself and the team.”

Red Bull KTM Factory Racing’s Marvin Musquin will miss the entire 2020 AMA Supercross Championship due to a leg injury sustained during the off-season. Musquin recently underwent surgery to repair his left knee and he is now concentrating on intense therapy to heal over the next few months.