A significant haul of points despite struggling with sickness on race-day. 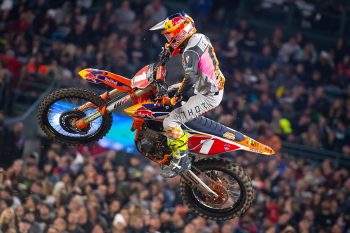 A difficult afternoon at Anaheim 1 wasn’t enough to ruin the opening round for defending Monster Energy Supercross champion Cooper Webb, coming through with an inspired podium in the main event.

It surfaced following qualifying that Webb had been struck with a bout of sickness, only managing to qualify his Red Bull KTM in 15th overall.

The 24-year-old improved to score third in his heat race, adding to his confidence prior to the 450SX final, in which he surged through the field from sixth in the early laps to secure a podium in P3.

“It was a tough day for sure, but sometimes that happens so it was good to go out,” he explained. “Practice wasn’t anything great – I think I was around 15th, so that wasn’t too good – but I feel like when the race started the heat went pretty good.

“In the main event I plugged away, had a decent start and made a few good passes. I found a good little comfort zone there in third, so just kind of rode it on in.

“I’m actually headed back to Florida to ride out there, St. Louis dirt is always pretty good and our dirt is similar, so I’ll head east and recover. I think it’s just a little 24-hour deal, so yeah, it’s a quick week, but we’ll do everything in our power to get back to 100 per cent.”

Webb’s result came as a surprise of sorts following his afternoon form, but will become increasingly important as the season progresses since he finished ahead of multiple title challengers on the night.