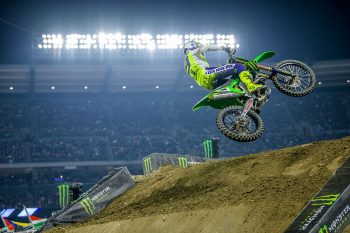 Finishing runner-up capped off a head-turning debut for Adam Cianciarulo in 450SX at Anaheim, declaring he was ‘good’ with his standout maiden result in the premier class.

The Monster Energy Kawasaki rookie stunned by going quickest in all three afternoon sessions to qualifying quickest, carrying on that form with second in his heat race.

Cianciarulo, 23, went on to put himself in position to challenge for victory in the first Monster Energy Supercross main event of 2020, leading his share of laps to eventually finish second to Justin Barcia – both making instrumental errors during the final.

Despite near winning in his first championship appearance on the factory KX450, Cianciarulo said he was satisfied with the podium and ultimately settled for position in the final laps after Barcia retook the lead.

“I felt really good, I made the mistake and kind of knocked the wind out of myself,” Cianciarulo admitted. “Justin coming by me aggressive as he is, I’m like, dude I really didn’t want the smoke. I was good with second after that to be honest with you.

“I settled a little bit too much and with three or four laps to go I told myself that my trainer Nick Wey, he’s going to be so pissed at me for settling, but Justin rode great and… I made the mistake and he was better, so second it is.”

Cianciaurulo carried measured expectations into the opening round after winning the Monster Energy Cup in October, expressing his need to remain calm in the lead-up to round one and throughout the program.

“Monster Cup was kind of a little bit of a surprise for me, so when I got done with that I was pretty stoked with where I was,” he explained. “I was like, ‘okay, maybe I can be a contender first year’. I wasn’t sure where my head was at going into the season until after that.

“For me, I have to constantly level myself out because this is so sick, I love this stuff! I mean, I would be one of you [media] guys if I didn’t have the talent to race a dirt bike, I’d be there or serving popcorn in the stands so I could catch a free seat. I love supercross.

“Just being up here with these guys and racing them, even early in the race I passed [Justin] Brayton and I was like, ‘dude, that’s Justin Brayton, he’s been around a long time’. I was watching Budds Creek ’03 the other day and he was out there, so even that stuff goes through my mind.

“It’s a constant process of saying ‘chill out, you belong here, you’re one of these guys’. It’s cool and makes the tough times of the sport better when you love it as much as I do.”