Later addition to factory organisation not ruled out by Ian Harrison. 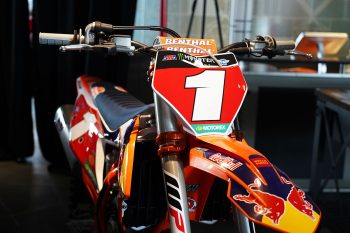 Defending Monster Energy Supercross champion Cooper Webb will be the lone Red Bull KTM entry at Anaheim 1, with the factory opting not to replace Marvin Musquin in the early rounds at least.

Webb delivered an incredible first year with KTM in 2019 to take seven wins and the elusive 450SX crown, tipped to be equally as competitive this season.

With teammate Marvin Musquin currently sidelined after injuring his knee in the off-season, Webb will become the sole focus of Red Bull KTM, although a later addition isn’t being ruled out.

“It is tough to make the decision, but luckily it doesn’t fall on me, it falls on our sponsors – KTM and Red Bull, ultimately,” Harrison stated. “In the case of Marvin, when a rider’s injured you still pay him, so it is an added expense to add another rider to your roster.

“To find somebody to fit in that slot is not easy, so we came to the decision that it would be better to put our focus on Cooper and see how that goes in the beginning. That’s not to say that we won’t add anyone, but for now we are just going to put our energy into Cooper for the moment.”

Once Musquin’s injury was made official by KTM, both Chad Reed and Martin Davalos were immediately linked to the seat alongside Webb, however, Reed will be Honda-mounted with Mountain Motorsports and Davalos is part of Team Tedder in his premier class transition with KTM support.