Lamborghini commitments could result in a 15-round send-off for icon. 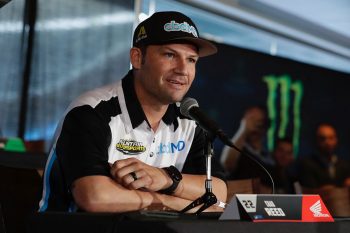 Conflicting dates between Monster Energy Supercross and his looming sportscar schedule could see Chad Reed miss up to two rounds of the 2020 season.

Reed, 37, will open his final season of Supercross today at Anaheim 1, the prestigious opening round in which he has previously won on three occasions.

With his Mountain Motorsports commitments including a continuation of Lamborghini competition, Reed has stated that he will line-up in ‘at least’ 15 rounds of 450SX through 2020.

“Last year I had the opportunity to do some car racing and, just like motorcycles did at three years old, it stole my heart,” Reed explained. “That was the moment that I was not falling asleep on night and motorcycles weren’t on my mind – it was all about how can I go faster in a Lamborghini?

“With that, here we are. I’m excited that I get to do… I’m not quite sure how many rounds, but I’ll do 15 at a minimum because there are a couple of conflicts with some car stuff. If the motorcycle thing’s going as well as I plan it to go, then my priority will be motorcycles and we’ll see what we can do.”