Former champion coming into Anaheim 1 under the radar tonight. 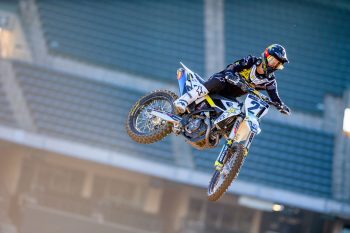 Rockstar Energy Husqvarna’s Jason Anderson will once again be in contention for the 2020 Monster Energy Supercross series when the gates drop at Anaheim tonight, despite a troublesome title defence last year.

The 2018 champion has had a positive pre-season that saw him line up in New Zealand and Australia, aiming to keep his program ‘simple’ this time around.

“Honestly, I’m just going out there and am just going to try and do my best,” Anderson commented. “It would be nice to win the championship and I’ve worked really hard to be up there and be winning races, but at the same time I feel like I just go from weekend to weekend looking what’s in front of me and trying to achieve those small goals.”

Anderson finished a lowly 14th in the wet conditions at Anaheim one year ago, however, managed to bounce back a week later in Glendale on that occasion to score second position.

A crash while practicing prior to round four saw him break his left arm amid a range of additional injuries, effectively ruling him out for the remainder of the season. He later returned during the outdoors, but tonight marks his AMA Supercross comeback.

“Last year, I don’t know if it was necessarily the pressure, it was just too many obligations that I didn’t want to do [laughs],” he continued. “For me, I just want to hang out and go ride dirt bikes, but at the top level those are the responsibilities that come with it whenever you’re the champion – they kind of stack up on top of each other.

“I was really overworked, I guess you could say, on the side of things that don’t really help your performance on the track, so I showed up to the first race overwhelmed with all of that stuff. This year I haven’t had many people talk to me… I’m excited and ready to go with low pressure.”

Anderson has been based on the west coast in California through the off-season, intending to return to Florida under Aldon Baker’s training program at the Baker’s Factory once the season travels east later in the year.