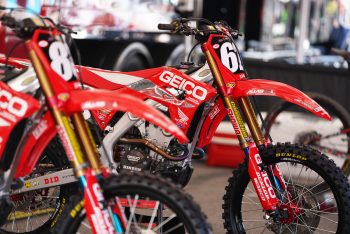 Official 250SX West teams for the 2020 Monster Energy AMA Supercross has been finalised at this weekend’s Anaheim 1 opener in California.

Number one plate-holder Dylan Ferrandis will defend the 1W with Monster Energy Star Yamaha, joined in the western region by Justin Cooper.

A two-rider Geico Honda roster is led by the experienced Christian Craig, joined by Australian rookie Jett Lawrence on the factory-supported CRF250Rs.

JGRMX Yoshimura Suzuki will have a single RM-Z250 on track in the west rounds led by Alex Martin, as will Rockstar Energy Husqvarna with Michael Mosiman already confirmed previously.

Another high-profile team lining up at A1 includes the Penrite Honda Racing team that Justin Brayton has won four-straight Australian championships with, signing Mitchell Oldenburg and Luke Clout.