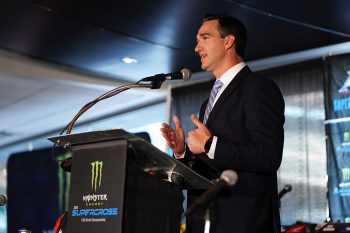 Sam Boyd Stadium in Las Vegas has hosted the annual off-season race since its inception in 2011, however, from this year it will be contested in Carson, CA.

“The Monster Energy Cup will be moving to Southern California on October 10th,” Feld Motor Sports’ Dave Prater announced. “The event will take place at Dignity Health Sports Park and we’re extremely excited about a new era for the Monster Energy Cup.”

Dignity Health Sports Park – formerly the Home Depot Center and StubHub Center – has previously hosted the X Games and is the home ground of the LA Galaxy soccer team.