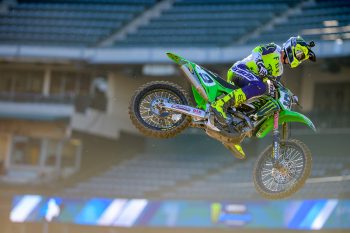 High-profile premier class newcomer Adam Cianciarulo isn’t getting caught up in the pre-season hype ahead of his 450SX debut at Anaheim’s Monster Energy Supercross.

After a late crash denied him of clinching the 250SX West crown in Las Vegas last May, Cianciarulo has gone on to win the outdoor title and also the Monster Energy Cup at his first attempt.

That type of form has set high expectations upon the 23-year-old after signing a one-year deal with Monster Energy Kawasaki in the off-season, however, he’s remaining calm ahead of the lengthy 17-round title chase.

“I think it’s about not paying attention to the noise as much,” Cianciarulo commented. “With the way last year ended in Supercross and then coming back and doing well, accomplishing some goals of mine and then doing well at Monster Cup in our debut, it’s cool the fans have been super-stoked.

Cianciarulo was one of the major movers of the silly season, stepping up from Monster Energy Pro Circuit Kawasaki and joining title favourite Eli Tomac on the factory Monster Energy Kawasaki KX450 in place of Suzuki-bound Joey Savatgy.