Over 120 hours of coverage formally confirmed ahead of Anaheim opener. 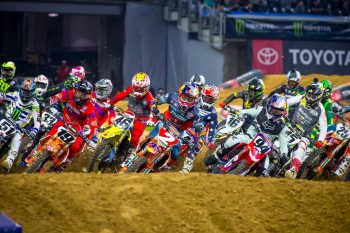 NBC Sports will present more than 120 hours of Supercross in 2020, highlighted by live coverage across NBC, NBCSN, NBCSports.com, the NBC Sports app and NBC Sports Gold.

NBC Sports Gold will offer subscribers the ‘Supercross Pass’ – a comprehensive one-stop-shop package of events that will include all supercross qualifiers and races live and on-demand replays without commercial interruption, as well as present exclusive expert analysis and interviews. It’s available now for $74.99.

NBC Sports looks ahead to 2020 with the Supercross Preview Show, a one-hour made-for-television special that will air this Friday night, 27 December at 12:00am ET on NBCSN. Encore presentations will air on NBCSN on Sunday, 29 December at 7:00pm ET and on Saturday, 4 January at 9:00pm ET.

NBC Sports’ 2020 Supercross programming begins on Saturday at 10:00pm ET on NBCSN, with live coverage from Angel Stadium of Anaheim in Anaheim, California., kicking off the first of 14 consecutive weeks of Supercross on NBC, NBCSN, NBCSports.com, the NBC Sports app and NBC Sports Gold, before returning for the final three rounds after the Easter break.

The 2020 schedule includes a pair of events airing on NBC, including St. Louis on Sunday, 12 January, and also Foxborough on Sunday, 19 April. The 2020 season will culminate with the Monster Energy Cup on Saturday, 10 October via NBCSN. 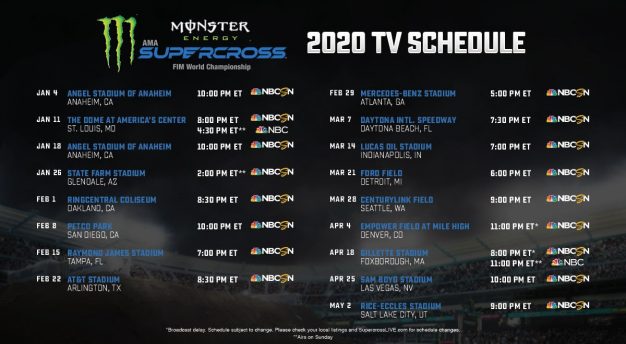