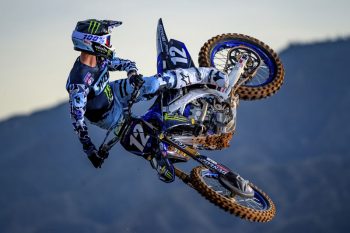 A switch to Monster Energy Star Yamaha for the 2020 season will be a vital one for Shane McElrath, tipped to contend for a 250SX crown in whichever coast he’s entered.

McElrath has six-career victories to his credit in 250SX as he moves across from KTM, including a Triple Crown overall at Anaheim 2 last season.

The transition of McElrath to the factory-supported YZ250F is a tantalising one, previously finishing runner-up in the 250SX West standings in 2015 and 2017. Last year he was eighth in points after missing multiple rounds.

“I’m very excited for this opportunity with the Monster Energy Star Yamaha Racing team,” McElrath said. “It was a big decision to make the move and so far, everything’s been going well.

“I’m excited because I think it’s really going to be good for me and moving forward into my 450 career. I’m looking to carry our momentum into the season and fight for the championship.”