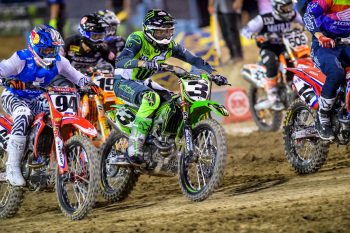 Monster Energy Supercross has established the rounds that will host Triple Crown events throughout the 2020 season as round one draws closer on 4 January in Anaheim.

In its third year, the three Triple Crown format races will take place at State Farm Stadium in Glendale on 25 January, AT&T Stadium in Arlington on 22 February, and at Sam Boyd Stadium in Las Vegas on 25 April.

The trio of Triple Crowns will form a mini championship within in the championship, which has previously been won by Eli Tomac (Monster Energy Kawasaki) and Cooper Webb (Red Bull KTM Factory Racing).

Organisers of the series have also confirmed the the East/West Showdown races for next year, which will be held at Empower Field at Mile High in Denver on 4 April and Rice-Eccles Stadium in Salt Lake City on 2 May.

2020 will mark the first time in the sports history that the East/West Showdown races will take place in two new cities, in an effort to expose the younger 250SX class riders to new audiences.