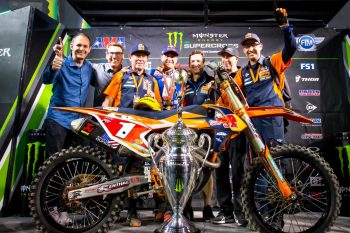 It was confirmed earlier that Dungey had entered an agreement that would see him play a pivotal role in the future of Honda’s factory 250 team, prompting his formal KTM exit.

“Ryan is a stand-up guy both on and off the racetrack – a true professional in every sense of the word – and we are confident that he will be successful in anything he chooses to take on,” explained Red Bull KTM Factory Racing team manager Ian Harrison.

“He has done so much for the KTM brand and when he handed the torch off in 2017, we feel that the program has only gotten stronger as we continue to achieve milestones with our athletes and development of the motorcycle. We wish Ryan the best as he heads into the next chapter of his post-racing career in the industry.”

In addition to his decorated racing career, Dungey made an undeniable impact on the KTM brand with the early success of the Red Bull KTM Factory Racing effort in the US and the development of the KTM 450 SX-F Factory Edition.

Dungey first joined KTM in 2012 alongside distinguished leaders Roger De Coster and Harrison, going on to achieve a haul of race wins, three supercross championships and two outdoor titles prior to retiring in 2017.