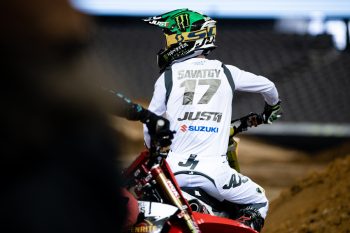 Joey Savatgy has issued a statement on the practice crash that ruled him out of the Monster Energy AUS-X Open Melbourne over the weekend.

The American, who recently signed a deal with JGRMX Yoshimura Suzuki Factory Racing, crashed heavily after clicking neutral on the face of a triple-on-off section.

Savatgy was immediately attended to by the Racesafe medical crew where he appeared to have lower-leg pain, and was later transported to a local hospital. Details on his condition at the venue remained vague for the duration of the night.

The number 17 has since come forward with a comment on social media, indicating he’s still unsure on the length of his recovery, while he continued to be tight-lipped on the diagnosis of his injury.

“It’s easy to ask why, but hard to accept and move on,” Savatgy commented. “Had a freak deal hitting neutral as I took off the face and the rest is history.

“[I] can’t thank the whole medic crew, J.H Leale, [and] Ellie Reed enough for taking care of me and getting me situated. Really bummed I wasn’t able to race, the boys from S-X Open Supercross crushed it. As for Team17 – we will be back, when I have an idea, so will you.”

Savatgy it doubtful to make A1’s season-opener, which is just over four weeks away, scheduled on 4 January.