Full season the plan for Reed to cap-off supercross career

Two-time champion declares intentions to race all 17 rounds in 2020. 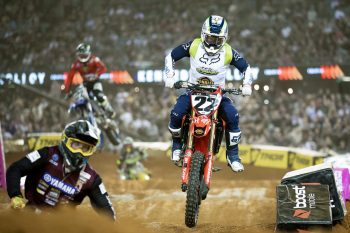 Chad Reed admits he intends to race all 17 rounds of the 2020 Monster Energy AMA Supercross Championship, which comes after the two-time champion confirmed he’ll retire from professional racing after next season.

It was an emotionally-charged night for the number 22 at Saturday’s Monster Energy AUS-X Open Melbourne that marked his final appearance down under as a full-time supercross athlete.

It’s been widely reported Reed will contest his 250th supercross at Anaheim’s season-opener before calling time on his career, however the New South Welshman has quashed those suggestions, insisting he plans to make a full campaign in the 2020 series.

“I have full intentions of racing 17 supercross’ in America next year,” Reed declared to MotoOnline.com.au. “Obviously, discussions and everything like that, they’re going positive.

“My friends and my team at Mountain Motorsports have been working their butts off. I feel good about it – I really do, and I think we’ll make it happen. At this point, the plan is not to go 250 and walk away – I plan on racing 17 races next year.”

Reed is still finalising his deal to compete in the entire series, which will likely see him with the same Mountain Motorsports Honda CR450R set-up that he’s utilised for the Monster Energy Cup and S-X Open series.