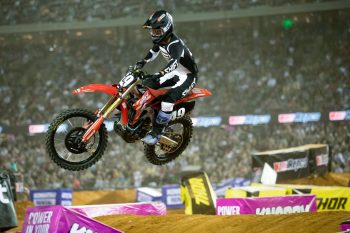 The experience of racing the Monster Energy AUS-X Open Melbourne on debut as a professional has proven to be vital for Jett Lawrence as he embarks on his rookie season in the 2020 Monster Energy AMA Supercross 250SX West Championship.

Lawrence, just 16 years of age, was impressive all throughout the night show inside Marvel Stadium, leading a number of laps and almost securing victory in the final encounter, ultimately recording a 4-3-2 scorecard for fourth overall.

The Geico Honda rider fell victim to two last corner manoeuvres which denied him of landing on the podium, although the popular teenager could only draw positives from the night.

“It was so good to kind of get all the nerves out before A1, so it’s helped a lot in my road to A1,” Lawrence explained to MotoOnline.com.au. “It was so fun, I had a blast. The boys were on it – there was some good racing, and I had a few sketchy moments – I barely kept it on two wheels, but I came out of it in one piece – I’m pretty pumped with that.

“My first pro race was pretty good, I think I went 4-3-2. I’m pretty happy with this. I wish I could’ve won the last one, but Mitchell Oldenburg got me in that last turn – I was bummed about that. If I won that, I would’ve been on the podium – it put me down a place, it was bummer and it is what it is.”

The Monster Energy AMA Supercross Championship is scheduled to commence on 4 January at Anaheim.